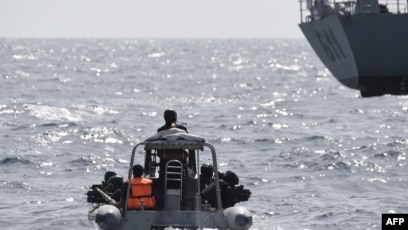 It is in Luba, 45 kilometers south of Malabo, the capital, that the authorities are holding the boat and its crew.

The Equatorial Guinean authorities have seized a ship suspected of piracy and illegal transport of contraband, official sources said.

According to the authorities, the vessel was carrying crude oil and was sailing without authorization and without an identification flag in Equatorial Guinean waters. Its 25 crew members are being held in this coastal country along the Gulf of Guinea, which is a theater of piracy and a transit route for drug trafficking.

It is in Luba, 45 kilometers south of Malabo, the capital, that the authorities are holding the boat and its crew.

"The vessel is being held for sailing in our waters without a navigation permit and without a flag to identify its country."said the Attorney General of the Republic.

The crude oil carrier boarded by the Equatorial Guinean navy on August 13 off the islet of Annobon, belonging to Equatorial Guinea and located 700 km north of Malabo, had a crew of 16 Indians, one Filipino, seven Sri Lankans and one Pole.

According to the authorities, the vessel Heroic Edun was boarded following an international alarm and some time after its escape from Nigeria where it is suspected of being involved in oil trafficking.

Equatorial Guinean authorities have indicated that they may return the boat to Nigeria after investigations.

Equatorial Guinean authorities say they are deeply concerned about maritime piracy, which has become frequent in the Gulf of Guinea in recent years. In May, the U.N. Security Council unanimously adopted a 15-member resolution condemning acts of piracy, high seas robbery, kidnapping and hostage taking in the Gulf of Guinea.

The UN calls on all states in the region to criminalize these acts under their domestic law and to investigate, prosecute and extradite the perpetrators as appropriate.

How could Africa become an alternative energy supplier for Europe?

@2022 – Developed and Edited by Waar Consulting