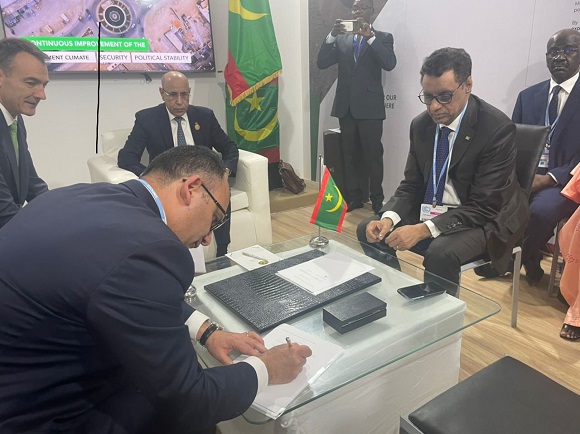 Mauritania signed a memorandum of understanding (MoU) on 8 November on the sidelines of the COP 27 climate summit in Sharm El Sheikh in the Arab Republic of Egypt with British Major (BP) on studies for the development of a large-scale green hydrogen project.

The signing ceremony took place in the presence of H.E Mohamed Ould Cheikh El-Ghazwani, President of the Islamic Republic of Mauritania.
The Memorandum was signed on the Mauritanian side by Mr Abdessalam Ould Mohamed Saleh, Minister of Petroleum, Mines and Energy of Mauritania and by Mr Bernard Looney, CEO of BP.

Under the terms of the MOU, BP undertakes to carry out technical and commercial studies to evaluate the production potential of a major green hydrogen production project in Mauritania.

The studies will cover, among other things, the availability and quality of wind and solar resources in large areas in the northwest of the country.
The potential production capacity targeted by the project could reach up to 30 GW, producing 2 Mtpa of green hydrogen per year, if the studies are successful.

The signing of this agreement is part of the Mauritanian government's strategy to mobilise the country's vast resources of gas, renewable energy and iron ore to build an integrated hub for the production and export of green hydrogen and its derivatives, notably ammonia, as well as green steel.

Mauritania has developed a roadmap for hydrogen development and aims to achieve universal access to electricity by 2030 and a 50% renewable energy mix.